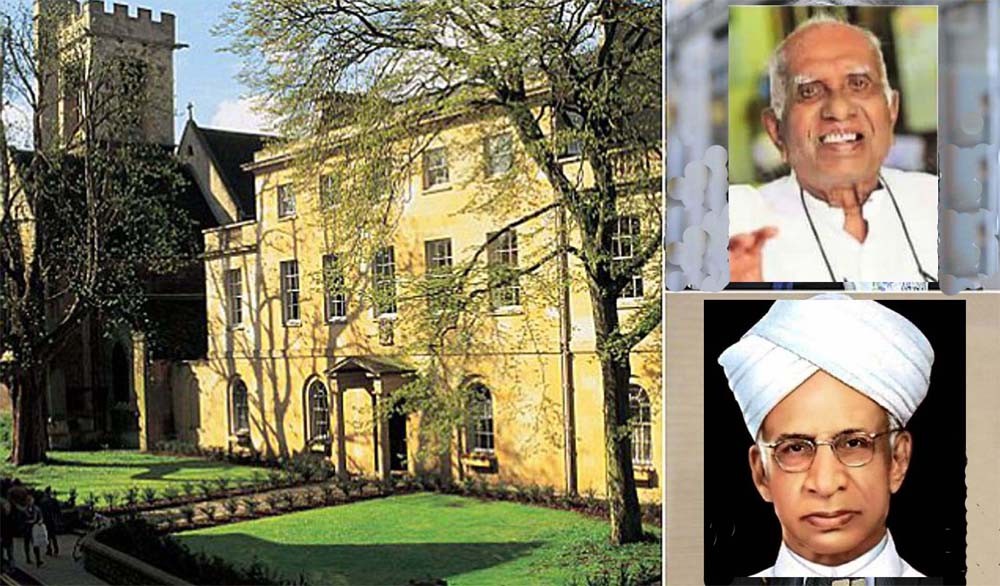 “I am an ecumenist to the core, in theory and praxis,” Ninan Abraham, former Vice Chancellor of Kanpur University, told me on the eve of his turning 100 on November 22.
“While at Oxford, I obtained an MLitt based on a thesis on Wordsworth in which I dealt with ecumenism in all its manifestations. I found that the poet had  absorbing interest in two types of faith, ie the mystical and the prophetic.
“The Indian religions had a preponderance for the mystic and the religions of the Middle East  prophetic--Islam, the Jewish and all that. I have come to the conclusion that all faiths and religions should come together sans borders that they may become one,” Prof Ninan said.
Age will not wither nor custom stale.  Prof. Ninan was happy to recall some of the inspiring episodes from his long and fulfilling life from a village boy in Kottayam to enter the hallowed grounds of the 925-year old University of Oxford.
With a First Class First Rank BA Hons from the Madras Christian College under the University of Madras, he spent 10 years as student and teacher in Kerala’s pioneering Union Christian College, Aluva in Ernakulam Distirct. Pioneering because, it was launched by three stalwarts of three dominant Christian denominations–the Orthodox, the Marthoma and the CSI.
Prof. Ninan went to Oxford on the inaugural British Council Scholarship. Of the three years spent there, he obtained a BLitt, MLitt  and an MA in Philosophy and Psychology. His BLitt was based on his thesis on John Keats and MLitt on research on William Wordsworth. He studied in St Peter’s College where William Howard was his Mater.
In Oxford, he met his mentor Dr. Sarvepally Radhakrishnan, who was among the scores of eminent teachers there. Radhakrishnan, who was concurrently India’s ambassador to Moscow, remained in London and left for Moscow during the vacation because “there is nothing for me to do there”.  Prof. Ninan used to attend many of Radhakrishnan’s lectures on ‘Eastern Religion and Ethics.’ Radhakrishnan who became the vice president of India and then the President himself visited Christ Church College to open a new academic block and stayed with Ninan as his guest.
“While in Chennai and Aluva, I was moved by the principles of ecumenism enunciated by great teachers like K.C. Chacko, V.M. Ittyerah and A.M.Varkey who became the triumvirate  to establish Union Christian College on ecumenistic principles. “I was born in 1921 and so was the UC College,” he recalled.
In Aluva, Ninan initially did his Intermediate studies. After Madras Christian College, he returned to Aluva to join as a Tutor in English at the age of  20. He also served as warden of North East Hostel when K.C. Chacko vacated the post. The hostel was renamed after Chacko when he passed away. Ninan was an active member of the ecumenical prayer group run by Chacko that eventually rose to become a permanent Aluva Fellowship.
In Aluva, he had many brilliant youngsters as disciples. The list included P.K. Vasudevan Nair, who became Chief Minister of the State, Marxist ideologue   P. Govind Pillai, and writers Malayattor Ramakrishnan, C.J. Thomas and Chemmanam Chacko.  Both Joseph Marthoma Metropolitan and Baselios Marthonma Didimos Catholicos of the Orthodox Church were his students. So also Nitya Chaitanya Yati,  Hindu philosopher-writer and Fr TJ Joshua, Professor Emeritus  of the Malankara  Syrian Orthodox Seminary, Kottayam.
He left for Kanpur after stints in Catholicate College, Pathanamthitta  as Principal and Hislop College, Nagpur as Lecturer. Ninan served the 155-year old Chirist Church College, Kanpur as Principal for  25 years and was elevated as Vice Chancellor of the Kanpur University  during the Emergency as the senior most principal in Uttar Pradesh.
He also served as President of the All India Association for Christian Higher Education and Director of the  Kerala Centre for Christian Higher Education. He won emcomiums and honours as a best teacher and educator and gave away awards for the best principals in Kerala.

Interesting to hear him about the pattern of his long period of life in Kanppur. Started with a salary of Rs 600 as principal of the CNI-run Christ Church College in 1957, he retired with a pay packet of 2250 in 1982. Of course he had an official car and a driver. He also had a Private Secretary, Jacob Varghese from  Pathanamthitta who remains in the University as Officer on Special Duty.  Ninan is happy that his pension has risen to a whopping  1,20,000 when he is at the ripe age of 100.
A pleasant surprise in his neighborhood, was Jacob Varghese, a publisher, who was his student for MA English in Kanpur. Jacob, 79, after being a teacher of English in various colleges in Kerala and Goa, is a licensed publisher of international comics and books in Malayalam and English. He brings out King Features Syndicate’s comics by Lee Falk and Fred Fredericks, creators of Phantom and Mandrake,  Edgar Rice Burroughs who created Tarzan and Ian Fleming, the creator of James Bond. His works in English are sold in the entire Hindi belt and in Rajasthan, Himachal Pradesh, Andhra Pradesh, Tamil Nadu, Karnakata, West Bengal and North East.  During the last forty years Jacob must have sold at least half a million copies of comics along with fiction and non-fiction titles.
Ninan lives in a well laid out garden house in the village of Payyappady in Puthupally Panchayat, 11 km east of Kottayam, amidst a green farmland overshadowed by the hills of Vennimala believed to have been the head quarters of the Thekkumkoor royalty that ruled over the land a thousand years ago. Great Carnatic musician Shadkala Govinda Marar was also born there.
Ninan found Aleyamma, an MSc in Botany who was teaching in Sri Lanka as his life partner. She belonged to Vattakunnel family in Kottayam. She gave him company for over half a century to pass away at the age of 85,  some 14 years back. In the company of fond memories Prof Ninan lives in first floor of his  house tendered by a handful of housekeepers and looked after by his eldest son Bobbie and his wife Mareen who live on the ground floor. He has no  strict regimen on food. He has both veg and non-veg on his palette but is fond of fish.
Bobbie Abraham and Mareen are doctors. Bobbie is a general surgeon from Vellore Christian Medical College, serving Caritas Hospital, Kottayam  as medical director and Mareen is an ophthalmologist in the same hospital. His younger brother Bejoy Abraham is a transplant surgeon and lead eurologist at Kokilaben Ambani Hospital, Mumbai. Sister Annie Abraham is an English language trainer in Chennai.
Bobbie is happy that of his two daughters, Sarah Elizabeth Abraham and husband Mukundan, follow the footsteps of his father. Both are practicing architects in Oxfordshire in the UK.  The younger daughter Sarah Mariam Abraham’ a PhD from IIT Roorkee in Transportation Engineering, serves BITS Pilani as Asst Professor.
Ninan is proud that ecumenism has commandeered his personal life. There are non Malayalees and non-Christians among his in-laws and grand in-laws. “Ecumen, the motto of the World Council of Churches means  that “they may all be one,” Ninan chants it as a personal mantra for the future generations to follow.
Prof Ninan is writing his autobiography in right earnest. He was called an ‘eminent, ecumenist and educator’ in a citation when the All India Association of Christian Higher Education conferred to him an award in 1992.  He wants his autobiography titled the same, not a penny more, not a penny less as the English novelist Jeffrey Archer says.